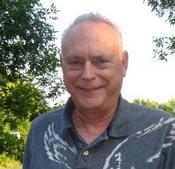 On January 19, 1969, he was united in marriage to Linda Leigh Ash in Pleasant Hill.

Jim was employed as a Civil Engineering Designer for Burns & McDonnell retiring in 2003. He then went to work for the Boy Scouts of America in various volunteer capacities as well as a property maintenance director.

He was also a 53 year member of the Boy Scouts of America where he held every position in Troop 300 and various council positions. He was a Medicine Man with the Tribe of Mic-O-Say, bearing the name Silver Distant Fox.

He is survived by his wife Linda of the home; one son Wheeler Hammontree and his wife Kristin of Ft. Huachuca, Arizona; one daughter Josie Hermsmeyer and her husband Ryan of Wildwood, Missouri; two grandchildren Laurelin Hammontree and Morgan Hermsmeyer; other relatives and friends.

A Cracker Barrel followed the service in the church fellowship hall.

Memorial contributions are suggested to the Boy Scouts of America - H. Roe Bartle Reservation or The Pleasant Hill First Christian Church and may be sent in care of the funeral home.

To order memorial trees or send flowers to the family in memory of James Hammontree, please visit our flower store.