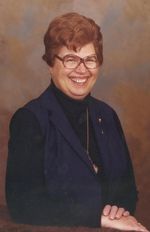 Jean Carol Carswell, 87, of Greenwood, Missouri, lovingly surrounded by her family, succumbed to cancer Sunday, January 31, 2010 after a long and courageous battle. She was born Monday, November 13, 1922 in Rose City, Michigan the daughter of Francis and Elsie (Jansen) MacDonald.

Her childhood was a joyful memory for her. She loved the teasing and good-natured ribbing that came from growing up with her six loving brothers Allen, Guy, Earl, twins Ray and Roy, Kenneth and sister Glada. She and her sister Glada were doted upon and loved by her brothers in this close-knit family.

She met Charles Carswell while attending nursing school, and married him October 30, 1948 at the Community of Christ Stone Church congregation in Independence, MO. She and Charlie were a formidable duo and attacked every challenge that life threw at them as an unstoppable team with a partnership of love.

She attended Graceland College and graduated as a registered nurse from the Independence Sanitarium and Hospital in 1948. She was an army nurse's cadet and she was ready to start active duty and serve her country when WW II was declared over.

She was a wonderful and compassionate caregiver and truly loved nursing. She worked in many areas including hospitals, public schools, VNA, and nursing homes. She was an experienced leader and served as a head nurse and administrator. She joyfully volunteered as the nurse at many, many youth camps, reunions and world conferences. She retired from Truman Medical Center East as a charge nurse. But, even after retirement, she continued working every fall, as recently as four years ago, giving flu shots to hundreds of Lee's Summit residents.

Her life was devoted to her four daughters and was happiest when she was surrounded by her family which included her girls, grandchildren and great grandchildren. Her nieces and nephews considered her their surrogate mother and she showered them with love, laughter and affection.

She was preceded in death by her parents, six brothers and her sister.

Memorial contributions are suggested to the Pleasant Hill Community of Christ Church or Graceland University School of Nursing and may be sent in care of the funeral home.

Please click here to view the video tribute
To order memorial trees or send flowers to the family in memory of Jean Carswell, please visit our flower store.