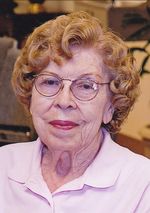 She married Raymond Carl Ebert on Christmas Eve 1941, in Kansas City, Missouri. Jean followed Raymond from camp to camp across the United States, working for the United Services Organization, until his deployment with the United States Army to the European Theatre during WWII. Following Raymond's return they farmed at Elmo, Missouri for 18 years.

Jean was a charter member of the Bradley-Carver Post of the American Legion Auxiliary in Elmo. Following Raymond's death in 1960, she moved to Grandview, Missouri, and worked for Dr. Deet's Pickett, Vern Nelson and Associates, and retired as an Executive Secretary for American Cyanamid's Fine Chemical Division.

Memorial contributions are suggested to Kansas City Hospice House or to an education fund of the givers choice.

Please click here to view the video tribute
To order memorial trees or send flowers to the family in memory of Jean Ebert, please visit our flower store.