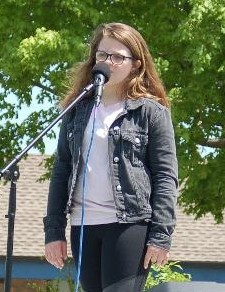 Jenna Annalea (Jenna "bean”) Yates, 12, of Strasburg, Missouri, was born, September 10, 2007, in Independence, Missouri, the daughter of Ernest R. and Kara L. (Hale) Yates.  She departed this life, Tuesday, February 25, 2020, alongside her brother as a result of injuries sustained in an automobile accident.

Jenna "bean" was a sixth grade student in the Strasburg  C-3 School district where she carried a 4.0 grade average, served as President of the Student Council, was a member of the S.T.E.M. Club, played Saxophone in the band, and was part of the Women’s Ensemble choir.  She loved singing and performing; most recently performing in the Strasburg Talent Show, Pleasant Hill Talent Show, and the Pleasant Hill Railroad Days.   She was an empathetic, kind, and caring, person and often running lemonade stands raising money for various causes close to her heart.  She was active, outgoing, and would light up the room when she walked in.

Funeral services were held Wednesday, March 4, 2020, at the Pleasant Hill United Methodist Church.  Burial was in the Lone Jack Cemetery.

Memorial contributions are suggested to Strasburg School District and may be sent in care of the funeral home.

To order memorial trees or send flowers to the family in memory of Jenna Yates, please visit our flower store.