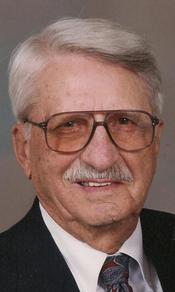 Jesse W. Hayes 96, of Pleasant Hill, Missouri, was born November 7, 1916, in a farmhouse near Pleasant Hilla�"the third of eight siblings and the eldest son of Jesse C. and Lola (Small) Hayes. He passed away at age 96 on August 22, 2013 at the Kansas City Hospice House in Kansas City, Missouri. He was preceded in death eight months earlier by his wife and soul mate of 71 years, Jacqueline (Bundy) Hayes.

Jesse grew up on a farm southwest of Pleasant Hill and attended Lone Star and Hickory Grove country schools and Pleasant Hill High School. He left high school during the Great Depression to work on road construction in Missouri and Texas, and then joined the Civilian Conservation Corps (CCC) in the mid 1930's where he drove a truck and planted pine seedlings near Austin, Texas. He sent money home to his family from all of these jobs.

Jesse enlisted in the U.S. Army in February 1941. He underwent basic training at Fort Francis E. Warren in Cheyenne, Wyoming, and was later stationed at Fort Leonard Wood, Missouri.

On June 14, 1941, he was married to Lucille Jacqueline Bundy, in Harrisonville, Missouri.

After the Japanese bombed Pearl Harbor, Jesse underwent desert warfare training near Needles, California and jungle warfare training in Hawaii. He served with the 6th Division / 20th Infantry in the South Pacific during World War II, where he made several amphibious landings on and around the Japanese-held island of New Guinea. He received two Purple Hearts for wounds he received during this campaign and was subsequently discharged as a Staff Sergeant at O'Reilly General Army Hospital in Springfield, Missouri, in December 1944, after five months of rehabilitation.

Upon returning home from the War, Jesse was employed by Bel-Saw Manufacturing in Pleasant Hill until being hired by the U.S. Postal Service in 1947. He retired from the Post Office in 1972 after serving as a rural mail carrier on every rural route out of Pleasant Hill at the time. He was also a successful farmer, with several hundred acres of corn, soybeans, wheat, oats, barley, and hay under cultivation at any one time. He sold the last of his farmland in the early 1980's, and he and Jackie began over thirty years of active retirement. Gardening (especially proud of his zinnias), crappie fishing on lakes in Missouri, Kansas, Oklahoma, and Texas, and travel with Jackie throughout the United States were his favorite pastimes. Jesse lived in Pleasant Hill all his life until he and Jackie moved to an assisted living facility in Belton in 2010. With declining health, Jesse moved to the Pleasant Hill Health and Rehabilitation Center in July 2013.

Jesse was a lifetime member of VFW Post 3118 and twice served as post commander. He was an Assistant Scoutmaster for Boy Scout Troop 300 in the late 1950's and was an honorary member of the Tribe of Mic-O-Say. Jesse was a long time member of the Pleasant Hill United Methodist Church, where he served on several church boards, including chairmanship of the building committee in the 1960's before and during the construction of the new church on Lexington Road. He was a member of the Lions Club and the Pleasant Hill Coffee Club, and he served on the board of Central Co-op in the 1960's. One of his proudest achievements was his 12 years of service on the Pleasant Hill Board of Education, from 1958 to 1970, where he served as treasurer.

In addition to his wife and parents, Jesse was predeceased by a brother, Jay Hayes; and two sisters, Audrey Hayes and Evalyn Hale.

Survivors include son and daughter-in-law, J. Michael and Judy Hayes of Cincinnati, Ohio; granddaughter, Melinda Hayes of Toledo, Ohio; brothers A.J. Hayes (Marilyn) of Columbia, Missouri, Jerry Hayes (Josie), Jerrall Hayes (Nancy) and sister Ruth Kingsolver, all of Pleasant Hill; sixteen nieces and nephews and their spouses, and many great nieces and great nephews and their spouses and children.

Memorials may be made to Kansas City Hospice, or the charity of one's choice, in care of the funeral home.

To order memorial trees or send flowers to the family in memory of Jesse Hayes, please visit our flower store.