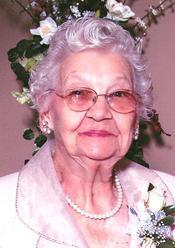 "Please note this is being held at our HARRISONVILLE chapel"

June Leslie of Grandview, Missouri was born May 26, 1921 in East Lynne, Missouri the daughter of James William and Gladys Marie (Garrett) Lotspeich. She departed this life on Saturday, March 24, 2012 at Crown Care Center, Harrisonville, Missouri at the age of 90 years, 9 months and 28 days.

June was employed as a secretary for the Federal Aviation Administration in Kansas City, Missouri for 25 years plus until her retirement on September 25, 1986. She was a faithful member of the First Baptist Church, Grandview, Missouri; had served on the Jackson County Election Board for 21 years; a member of AARP; the Shepherd Center, Grandview and was a Toast Mistress. June had moved to Grandview in 1974. She was proud of her family. June was friendly, outgoing, active and always had a smile. She was loved by her family and will be missed.

Besides her parents, June was preceded in death by two sons, David and Stephen Leslie; two daughters, Judy Phelps and Joyce Leslie; her sister, Ioma McFerrin.

To order memorial trees or send flowers to the family in memory of Jimmie Leslie, please visit our flower store.