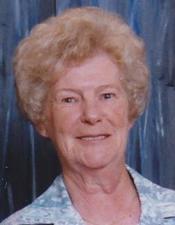 Joann Carol Griffey, 80, of Pleasant Hill, was born on Thursday, August 27, 1931 in Crescent City, California, daughter of George and Leona Cuba (Crawford) Leishman. She was the 11th of 13 children. She departed this life at 10:28 a.m. on Friday, February 24, 2012 at her home surrounded with love and family.

She was supervisor of housekeeping at John Knox Village for many years. She was a member of Auxiliary to the Veterans of Foreign Wars Post #5789, Lee's Summit.

Cremation has been accorded. Graveside services and inurnment will be held at 1:00 p.m. on Thursday, March 1, 2012, at the Pleasant Hill Cemetery. Mr. Scott Todd will officiate and Mr. Corey Todd will render the song Hallelujah.

Memorial contributions are suggested to Midwest Hospice and may be sent in care of the funeral home.

To order memorial trees or send flowers to the family in memory of Joann Griffey, please visit our flower store.