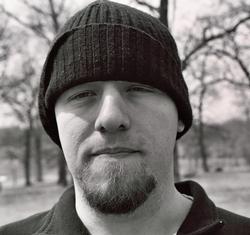 With support from family and friends, Johnny fought his depression and graduated from Lee's Summit High School in 1995.

The years immediately following were some of the best of his life, spent enjoying his friends while working odd jobs and taking very open-ended road trips. He dreamed of being an archeologist, but his love of family was much stronger, and he married Heather Michele Lamanno on October 18, 1998. Their son, Drue Lamanno Robertson, was born March 10, 1999.

A devoted father, John supported his family by attending technology school and working for Sprint, where he was employed for 14 years, most recently as a Test Engineer II. But his beloved coworkers were his career.

After his divorce, John found he still had a proclivity toward women named Heather, and was married to Heather Dawn Tilly in the Laura Conyers Smith Rose Garden in Kansas City, Missouri, on September 18, 2004. Their son, Calvin Spencer Robertson, was born April 6, 2010.

John was working to finally achieve his archeology dreams as a student in UMKC's PACE program, where he was an Osher Scholar.

He was preceded in death by his paternal grandfather John Robertson, Jr. and his maternal grandmother, Mary Grantham.

He is survived by his wife, Heather; two sons, Drue Robertson and Calvin Robertson; his parents John and Connie Robertson; his sister April Cereceres; paternal grandmother, Joan Robertson, of Albuquerque, New Mexico; maternal grandfather, Robert Grantham, of Ravenwood, Missouri; many other relatives, friends, coworkers and classmates he loved very much.

A graveside service and interment was held Sunday, February 16, 2014, at the High Ridge Cemetery, Stanberry, Missouri.

Memorial contributions are suggested to the American Foundation for Suicide Prevention and may be sent in care of the funeral home.

And John, if we knew you were planning a birthday party, we definitely would have brought some Guinness.

To order memorial trees or send flowers to the family in memory of John IV, please visit our flower store.