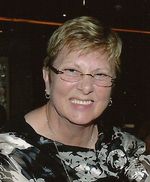 Judith Anne Collins, 69, of Pleasant Hill, Missouri was born Tuesday, September 24, 1940 in the Wingate Community near Pleasant Hill, the daughter of Jesse F. & Minnie B. (Braden) Brown. She departed this life at 10:10 a.m. on Friday, December 4, 2009, at the Research Medical Center in Kansas City.

On September 11, 1959, she was united in marriage to her high school sweetheart Richard "Dick" Collins in Pleasant Hill. Following their marriage they moved to Kansas City and later to Raytown to raise their 4 children; then returned to Pleasant Hill to make their home for the last 20 years.

Judy was a dedicated teacher for the Raymore-Peculiar School district for over thirty years and an accomplished seamstress and quilter. She and Dick enjoyed traveling, bicycling, motorcycle riding and creating lifetime memories with their children and grandchildren.

She was an active member of St. Anne's Episcopal Church, the altar guild at St. Anne's, the Research Hospital Medical Foundation Advisory Board and many other volunteer and community service efforts.

She was preceded in death by her parents; one son Richard Darin Collins; one brother Larry Brown; and one sister Phyllis Raybourn.

Inurnment will be in the Pleasant Hill Cemetery at a later date.

The family suggests memorial contributions to Research Foundation Nursing Scholarship Fund or St. Anne's Episcopal Church and may be sent in care of the funeral home.

Please click here to view the video tribute
To order memorial trees or send flowers to the family in memory of Judith Collins, please visit our flower store.