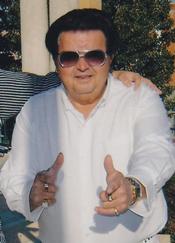 Kennie Lee Springer, 62, of Harrisonville, Missouri, formerly of Pleasant Hill, was born Sunday, January 9, 1949 in Strasburg, the son of Gail Franklin and Anna Mae (Carlyle) Springer. He departed this life at 9:25 a.m. on Friday, September 30, 2011 at the Cass Regional Medical Center, Harrisonville.

On November 11, 1973, Kennie was united in marriage to Glenda Louise Hutson in Harrisonville.

Kennie was employed as a Mill Wright for Honeywell for over 42 years. He was an active member and president of the Heartland Road Runners classic car club. He was a member of the Mill Wright Union #1529.

He was preceded in death by his mother Anna Kimbrough; maternal grandparents Roy and Sylvia Carlyle; and great grandmother Edna Enzor.

Kennie was the ultimate family man; he was a devoted husband, father, grandfather and brother. Growing up he was always there for the kids. He always chose to celebrate in sadness and to live life to its fullest. He could be counted on by his friends and family to be there when they needed them most; he would take their hands tell them to trust him and they would face the adversity together.

He is survived by his father Gail of Gunn City; wife Glenda of the home; two sons Jerry Lee (and Bonnie) Morris of Ozawkie, Kansas and Leroy Springer of Harrisonville; two daughters Deborah Plumley of Owings, Maryland, and Anna Springer of the home; three sisters Anna Dale (and Terry) of Stillwell, Kansas, JoAn (and David) Long of Cedar Creek, Texas, and Dena Hyatt of Warsaw, Missouri; eight grandchildren; five great grandchildren; other relatives and many, many friends.

Visitation was held from Tuesday evening at the funeral home.

Memorial contributions are suggested to Cars for Heroes and may be sent in care of the funeral home.

In honor of Kennie the family encourages you to drive your classic car in the procession to the cemetery.

Please click here to view the video tribute
To order memorial trees or send flowers to the family in memory of Kennie Springer, please visit our flower store.