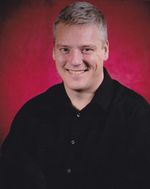 Kye was a 1988 graduate of Hickman Hills High school. He received his Bachelor's in Psychology from the University of Missouri at Kansas City where he was a member of the Sigma Phi Epsilon fraternity. Later he earned his Master's in Business Administration from Baker University. He was also a United State Army veteran.

Kye worked for American Century Finance on the Plaza in Kansas City.

He was preceded in death by his mother Launa on April 2nd 1996.

Cremation was accorded following the service.

Memorial contributions are suggested to the American Lung Association or to a memorial fund established by the family to plant a tree in Kye's memory.

Please click here to view the video tribute
To order memorial trees or send flowers to the family in memory of Kye Robertson, please visit our flower store.