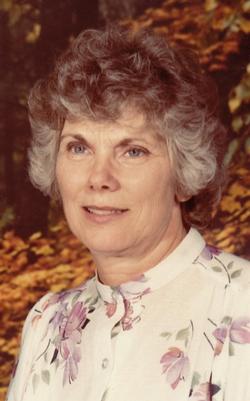 Lettie Lavonne (Viles) Carlile, 84, of Pleasant Hill, was born, July 16, 1931, in Kansas City, Missouri, the daughter of Basil V. and Lucy J. (Hipsher) Viles. She departed this life, Tuesday, May 17, 2016, at the Lee's Summit Medical Center surrounded with love and family.

On May 2, 1959, she was united in marriage to Donald J. Carlile in Harrisonville. He had baptized her just three weeks earlier.

In high school, Lavonne played basketball, Don enjoyed attending the games to watch her play. She later played on local town teams in both Pleasant Hill and East Lynne, MO. Lavonne was employed by Westinghouse, but quit shortly after she married. In 1962, she went on to work as the secretary for the East Lynne School district, retiring in 1994. She also served as the treasure and secretary for the school board. She was also a homemaker. She was an active member and served in the office of Priest in the Community of Christ Church, Pleasant Hill. She enjoyed gardening, canning, baking, cooking, and a good game of dominoes. She especially loved spending time with her grandchildren.

Lavonne was preceded in death by her parents and one granddaughter, Megan Carlile, and one brother, William B. Viles.

She is survived by her husband Don, of Pleasant Hill; her daughter, Jaylene Lavonne Shay of Clinton; two sons, Don B. (and Tina) Carlile of Waxahachie, Texas, and Steve W. Carlile of Lee's Summit; 8 grandchildren, Amy Lavonne Kennish of Montrose, Nick Shay of Corpus Christi, Texas, Jacob (and Rosalynda) Carlile of Santa Rita, Guam, Laine Shay of Athens, Georgia, Lexi Lettie Carlile and Tori Carlile both of Ocean Side, California, Brad Carlile and Caleb Carlile, both of Waxahachie; one great granddaughter, Hannah Sue Lavonne Kennish of Montrose; one sister, Georgia L. Beeman of Katy, Texas; several nieces and nephews as well as a host of other relatives and friends.

Visitation was held Sunday, May 22, 2016, at the funeral home, followed by the Ceremony of the Rose by the Pleasant Hill Lions Club.

Memorial contributions are suggested to the Pleasant Hill Community of Christ Church.

To order memorial trees or send flowers to the family in memory of Lavonne Carlile, please visit our flower store.