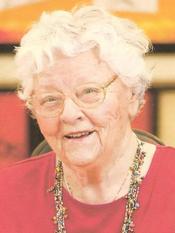 Mrs. Stanley was a 1935 graduate of Manhattan High School. She attended one year at Kansas State University but completed her education at the University of Missouri.

She was united in marriage to Raymond E. Stanley on December 3, 1938 in Picher, Oklahoma. They had 67 wonderful years together before he preceded her in death on December 23, 2004.

Raymond and Lillian owned funeral homes in Eskridge, Kansas; Baldwin, Kansas; and Parsons, Kansas prior to acquiring the Stanley Funeral Home in Pleasant Hill in 1954. The Stanley family served the families of Pleasant Hill with dignity, pride and honest service for over 50 years.

Clark and Eugenia Stanley purchased the funeral home in 1977. Lillian and Raymond then retired to Grove, Oklahoma, where they loved to spend time fishing on their pontoon boat under Sailboat Bridge on Grand Lake. They truly enjoyed retirement and were able to travel extensively; they were especially fond of long cruises. She spent the last few years at the Valley View assisted living facility in the John Knox Village complex. She was an excellent bridge player and could do almost anything with her computer.

She was a past Worthy Matron of the Order of the Eastern Star and the P.E.O. sisterhood. She was a Methodist and rarely missed a service at the John Knox Village Chapel. Mrs. Stanley was also preceded in death by a granddaughter, Amy Stiefvater; 3 brothers, and her sister.

Memorial contributions are suggested to Home of Hope, c/o Jodi Manning, Box 903, Vinita, Oklahoma 74301 or may be sent in care of the funeral home.

Please click here to view the video tribute
To order memorial trees or send flowers to the family in memory of Lillian Stanley, please visit our flower store.