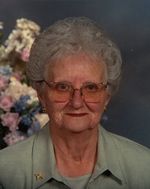 Lola and Marshall "Alva" owned and operated the Campbell Drug Store in downtown Pleasant Hill for over Forty-Five years.

She was preceded in death by her husband; three brothers Walter "Buddy" McDaniel, Leroy "Boots" Williamson, and Richard "Junior" Williamson; and a sister Wilma Wisdom.

Memorial contributions are suggested to the Pleasant Hill United Methodist Church building fund and may be sent in care of the funeral home.

Please click here to view the video tribute
To order memorial trees or send flowers to the family in memory of Lola Campbell, please visit our flower store.