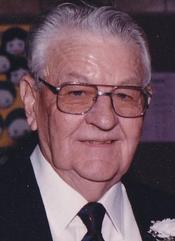 In April 1941, he was united in marriage to Edith "Butchie" Carrie Standifer in Clovis, New Mexico. She preceded him in death on January 18, 2002.

He was a WWII Army veteran, serving in the European Theatre of Operations. He fought at the D-Day invasion and the Battle of the Bulge as well as several other skirmishes in and around northern Europe. Bud was an avid farmer and outdoorsmen. He loved farming, hunting, and fishing; he was happy just being outside. Most importantly he loved his family. He was proud of his family and cherished the time spent with all of them.

He was also preceded in death by two brothers Adrian Winfrey and Fred Winfrey.

Bud is survived his son and daughter-in-law Buddy and Linda Winfrey of Kingsville; granddaughter Dana Carter and her husband Keith of Lone Jack; two great grandsons Kyle and Klay of Lone Jack; other relatives and friends.

Memorial contributions are suggested to the VFW Post #3118-Veterans Welfare Fund and may be sent in care of the funeral home.

Please click here to view the video tribute
To order memorial trees or send flowers to the family in memory of L.W. Winfrey, please visit our flower store.