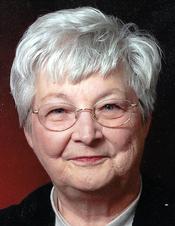 Margaret Helen Fogarty, 74, of Pleasant Hill, Missouri, was born March 18, 1939, in Chicago, Illinois, the daughter of Joe and Helen (Moore) Pattinson. She departed this life at 3:07 p.m. Friday, December 27, 2013, at the Village Hospice Care Center surrounded with love and family.

On August 17, 1958, she was united in marriage to John Fogarty in Pittsburg.

Margaret and John had lived in Pittsburg, Kansas, Santa Monica, California, Denver, Colorado, and Arizona prior to making their home in Pleasant Hill in 1999.

Margaret was a co-administrator for the Hickman Mills Family Practice Clinic for over twenty years retiring in 1982. After retirement she enjoyed spending time with her grandchildren, tole painting, beading and crafting. She was an avid arts and crafts maker and sold her crafts at numerous area craft shows.

She was preceded in death by her parents and her sister Mary Miller.

She is survived by her husband John of the home; one daughter Beverly Lynn (and Rick) Kalwei of Greenwood, Missouri; two grandchildren, Justin (and Nikki) Kalwei of Lee's Summit, Missouri, and Kelly (and Chad) Johnson of Pleasant Hill; two great grandchildren, Madison Grace Johnson, and William Chase Johnson; one brother Jim (and Jan) Pattinson of Springfield, Missouri; other relatives and many friends.

Visitation was held Thursday, January 2, 2013, at the funeral home.

Memorial contributions are suggested to the Pleasant Hill United Methodist Church and may be sent in care of the funeral home.

To order memorial trees or send flowers to the family in memory of Margaret Fogarty, please visit our flower store.