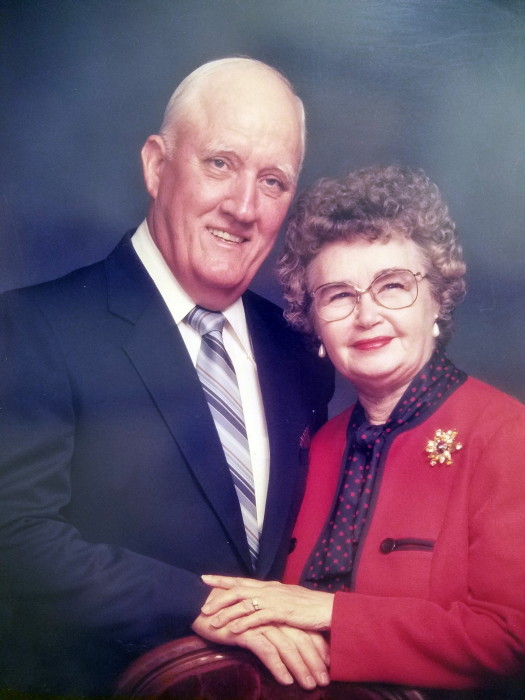 Margaret V. Griffith, Sr., 98, of Raymore, was born, July 13, 1919, in Greenwood, the daughter of Claude W. and Alice R. (Johnson) Long.  She departed this life, Wednesday, March 7, 2018, at the Foxwood Springs Living Center, Raymore, surrounded with love and family.

On March 28, 1948, she was united in marriage to Lawrence Allen Griffith, Sr., in Greenwood. He preceded her in death one day earlier on March 6, 2018, culminating an end of nearly 70 years of marriage.

Margaret had been employed for Pratt & Whitney and Wolfermans Bakery; later she became a full time homemaker.  She was a former member of the Lee’s Summit Christian Church where she had been active in the CWF.  She was currently a member of the Raymore Christian Church.  She enjoyed fishing with Lawrence, crocheting, needlepoint, quilting, and cooking. She especially loved music and was an accomplished organist and pianist.

Margaret was preceded in death by her parents; her son Allen Griffith, Jr.; two grandsons, Travis Giaccetti and Joshua Griffith; her twin brother Marvin Long; and one sister Louise Cox.

She is survived by her daughter, Joyce Giaccetti of Raymore; four grandchildren, Tracie (and Nick) Biggerstaff of Overland Park, Kansas; Joseph Griffith of Buffalo, New York, Angela (and Jason) Scarborough of Odessa, and Christina (and Gareth) Stevenson of Ruckersville, Virginia; 10 great grandchildren; other relatives and friends.

Visitation for both Lawrence and Margaret was held  Friday, March 9, 2018, at the funeral home.

To order memorial trees or send flowers to the family in memory of Margaret Griffith, please visit our flower store.