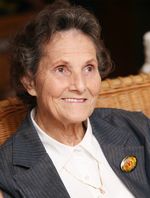 Margaret Louise Koerber, 81, of Kansas City, Missouri, was born Tuesday, September 4, 1928 in Strasburg, Missouri, the daughter of Frank Samuel and Willard Josephine (Brain) Norton. She departed this life Friday, June 11, 2010 at her home.

On April 23, 1949, Margaret was united in marriage to George Martin Koerber in Kansas City, Missouri. He preceded her in death on May 8, 1993.

Louise was a Cafeteria Manager for the North Kansas City School District, retiring in 1994. She was a faithful and active member of the Gashland United Methodist Church.

Louise will always be remembered as one of the kindest, most compassionate and generous, loving and supportive, energetic, independent... but stubborn people you could ever meet.

The family held a Celebration of Life service on Saturday, June 19, 2010, at the Gashland United Methodist Church.

Memorial contributions are suggested to the Gashland United Methodist Church and may be sent in care of the funeral home.

Please click here to view the video tribute
To order memorial trees or send flowers to the family in memory of Margaret Koerber, please visit our flower store.