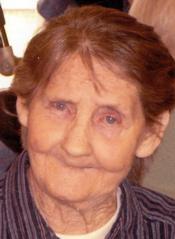 Margie was a wonderful homemaker. She had also been employed as a Cook and Housekeeper for the ABC Nursing Home in Harrisonville, was the Lunch Lady for the East Lynne school district for several years, and a cook at Twin Pines Country Club, Harrisonville. She loved flowers, coffee, camping, and a good garage sale. She attended the East Lynne Baptist Church.

She is survived by one son Jeff Roberts of Peculiar, formerly of East Lynne; two grandsons Doug (and Amanda) Linthicum, of Schell City, and Nathan Roberts of Appleton City; three granddaughters Lindsey Roberts of Strasburg, Alyssa Roberts of Clinton, and Azlynn (and Justin) Stacy of Peculiar; seven great grandchildren Trevor, Rebekah, Alyssa, Shawn, Brandon, Caden, and Brecklynn; other relatives; and many friends.

Funeral services were held Monday, May 13, 2013 at the funeral home where visitation was held one hour prior to the service. Reverend Clifford Woolery officiated. Interment was in the Strasburg Cemetery. Casket bearers were Vance Hammond, Doug Linthicum, Shawn Linthicum, Jeff Roberts, Sam Roberts, Terry Roberts, Justin Stacy, and Eric Williamson.

Memorial contributions are suggested to the family.

To order memorial trees or send flowers to the family in memory of Margie Roberts, please visit our flower store.