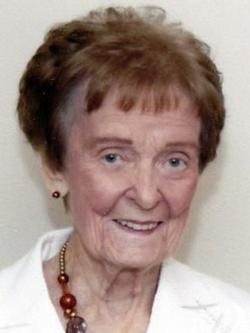 Marion Ruth Murphy, 92, of Greenwood, was born, December 19, 1923, in Wilkes-Barre, Pennsylvania, the daughter, of Frank Michael and Ruth Loise (Capwell) Connors. She departed this life Tuesday, March 1, 2016, at her home.

Marion was a 1941 Wilkes-Barre High School graduate; later earning her bachelor's degree in teaching from the Misericordia college, Dallas, Pennsylvania.

On June 24, 1950, she was united in marriage to John Joseph "Jack" Murphy in Wilkes-Barre. He preceded her in death on January 31, 2015. Marion was a homemaker. She was a loving mother who cherished spending time with her family. She was a member of the St. Robert Bellarmine Catholic church, Blue Springs and devoted her life to the Blessed Mother.

A private Mass of Christian Burial was celebrated at the St. Bridget Catholic Church. Interment was held in the Floral Hills East Cemetery, Lee's Summit.

Memorial contributions are suggested to the Knights of Columbus Council #13113 and may be sent in care of the funeral home.

To order memorial trees or send flowers to the family in memory of Marion Murphy, please visit our flower store.