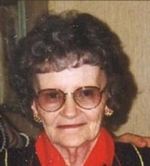 Marjorie Allene Fisk, 86, of Mesa, Arizona, formerly of Olathe, Kansas was born Tuesday, December 19, 1922 in Trenton, Missouri, the daughter of Emmett and Cecile (Elliott) Dennis. She departed this life Saturday, April 18, 2009 at the Odyssey Hospice House, in Mesa.

Marjorie was raised in Northern Missouri and lived in Kansas City, Missouri, Las Vegas, Nevada and Olathe, Kansas before moving to Arizona in 2007.

Marjorie was a machine operator for Stuart Hall Stationery in Kansas City for over 20 years.

She was also preceded in death by one son Robert Fisk and one sister Francis (Dennis) Todd.

To order memorial trees or send flowers to the family in memory of Marjorie Fisk, please visit our flower store.