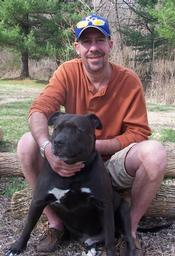 He was a 1980 graduate of Pleasant Hill High School. Following graduation he moved to Oklahoma where he worked the oil fields. After his time in the fields he became an ASE Certified Mechanic and went work for Kennedy Tire & Auto in Edmond, Oklahoma; later he went to work for Lee's Summit Muffler & Automotive and worked their until failing health forced him to quit earlier this year.

On February 14, 1986, Michael was united in marriage to Sunnye Scott in Miami, Oklahoma; they divorced in 1997, but still remained friends.

He is survived by his parents Jerry and Pat of Pleasant Hill; two sisters Vicky VanLue and her husband Brad of Rayville, Missouri, and Nancy Laning and her husband Clifford of Pleasant Hill; two brothers Tony Kanies of Blue Springs, and Bobby Kanies and his wife Renea of Lee's Summit; six nephews; two nieces; other relatives and many friends. He will be especially be missed by his best friend and companion "Brute", Mike's 90 pound pitbull.

Memorial contributions are suggested to Kansas City Hospice and may be sent in care of the funeral home.

Please click here to view the video tribute
To order memorial trees or send flowers to the family in memory of Michael Kanies, please visit our flower store.