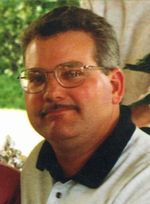 Micheal was the Director of Special Projects for EPC Computer Refurbishing in St. Charles. He had also worked as an over the road driver for the Penske Corporation.

He was a member of Poplar Bluff Masonic Lodge #209 AF & AM and the Bogey Hills Country Club in St. Charles. He was an avid golfer.

Micheal was a warm hearted person who was loved by all who knew him.

He was preceded in death by his father Jack Higgs.

Please click here to view the video tribute
To order memorial trees or send flowers to the family in memory of Micheal Higgs, please visit our flower store.