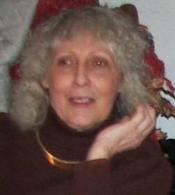 Muriel Frances "Frankie" Aebly, 67, of Independence, Missouri, was born Wednesday, January 5, 1944 in Kansas City, Missouri, the daughter of Francis Muriel and Dorothy Bernett (Stockdale) Aebly. She departed this life at 6:03 p.m. on Tuesday, October 11, 2011 at the Centerpoint Medical Center in Independence.

In 1965, Frankie was united in marriage to Jerry Grady. He survives, although they were no longer married.

She lived her life caring for her children and grandchildren, whom she loved very much. She was a homemaker, who loved to cook, read and plant flowers, her favorite was roses. She would always try to assist anyone that was in need of help. She had a very big heart and was a beloved daughter, sister, mother, aunt, and grandmother.

Besides her parents, she was preceded in death by one brother Frank Aebly, a granddaughter and a great granddaughter.

Cremation has been accorded. Private family services will be held at a later date.

To order memorial trees or send flowers to the family in memory of Muriel Aebly, please visit our flower store.