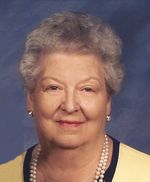 On March 7, 1943, Nadene was united in marriage to Robert William Meador in Kansas City, Missouri.

Nadene was employed as a payroll clerk for Grace Company, Belton, Missouri until her retirement in April of 1992 and later was a cook for Old Towne Cafe for 15 years. She was a member of Holy Spirit Catholic Church, Lee's Summit and the Ivy Leaf Chapter #215 Order of the Eastern Star, Pleasant Hill, Missouri. Nadene loved her family, enjoyed life and taking trips to Branson, Missouri. She had lived in Belton, Missouri before moving to Lee's Summit in 2008.

Besides her parents, she is preceded in death by her husband, Robert Meador on June 19, 1982 and a grandson, Douglas Meador.

Memorial contributions may be made to the DCI Dialysis and may be sent in care of the funeral home.

Please click here to view the video tribute
To order memorial trees or send flowers to the family in memory of Nadene Meador, please visit our flower store.