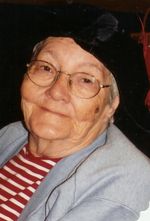 Nina King, 87, of Ottawa, Kansas, formerly of Pleasant Hill, was born Sunday, March 4, 1923 in Smithville, Oklahoma, the daughter of Elmer and Annie L. (Bodiford) Capps. She departed this life at 11:55 p.m. on Tuesday, October 19, 2010 at the Ottawa Retirement Village.

On March 17, 1941, she was united in marriage to Herschel C. King in Harrisonville Missouri. He preceded her in death on September 1, 1998.

Nina was a waitress at the Swope Park Club restaurant in Kansas City for many years. Later she was a caregiver and operated a private nursing home out of her own home in Kansas City.

She was a member of the Living Way Ministries in Ottawa.

She was also preceded in death by one daughter Jessie Marie Johnson, one brother and two sisters.

She is survived by one son Jesse (and Phyllis) Capps of Garnett, Kansas; three daughters Leila Craig of Ottawa, Phyllis Porter of LaCygne, Kansas, and Jackie (and Mark) Green of Leonardtown, Maryland; 22 grandchildren; numerous great grandchildren and great-great grandchildren; other relatives and friends.

Cremation has been accorded. A graveside service with inurnment was held at the Pleasant Hill Cemetery on Tuesday October 26th.

To order memorial trees or send flowers to the family in memory of Nina King, please visit our flower store.