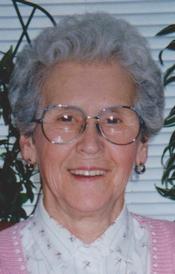 Oma Pauline Hall, 90, of Olathe, Kansas, formerly of Pleasant Hill, was born Monday, September 13, 1920 in Dora, Missouri, the daughter of Arthur and Arcie (Smith) Warden. She departed this life at 11:45 p.m. on Tuesday, June 28, 2011 at the Kansas City Hospice House, Kansas City, Missouri.

On April 12, 1947, she was united in marriage to Hubey Hall in West Plains, Missouri. He preceded her in death on May 12, 1977. Oma was a homemaker. She was a member of the Pleasant Hill, Methodist Church, United Methodist Women and Pleasant Hill Lioness Club.

She is survived by three children Randy Hall and his wife Debbie of Colleyville, Texas, Rose Olesen and her husband Bud of Olathe, and Richard Hall of Mission, Kansas; Ten Grandchildren; one sister Opal House of Nixa, Missouri; a son-in-law Steinar Amre of Tonsberg, Norway; other relatives and friends.

Memorial contributions are suggested to the Pleasant Hill United Methodist Church or to Kansas City Hospice House and may be sent in care of the funeral home.

Please click here to view the video tribute
To order memorial trees or send flowers to the family in memory of Oma Hall, please visit our flower store.