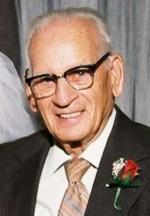 Ora Joseph "June" Raffurty, 95, of Kansas City, Missouri, was born Saturday, September 11, 1915 in the Ore Community near Pleasant Hill, the fifth of six children to Ora A. and Elizabeth (Armstrong) Raffurty. He departed this life at 12:57 a.m. on Sunday, November 14, 2010 at the Research Medical Center in Kansas City.

He was a WWII Army Air Corps veteran serving in the European Theatre.

Ora was employed as a Tool & Die Inspector for the Bendix Corporation, retiring in 1981. Prior to that he had been a machinist for American Steel Works and Remington Arms, an instructor for Pratt & Whitney, and a traveling salesman for G. W. Ryan.

He never let his age slow him down and still enjoyed his independence. He still drove wherever he needed to go and maintained a large garden. It was said he was the "Tomato King" of south Kansas City.

Besides his parents, he was preceded in death by three brothers Olin Raffurty, James Raffurty, and Ray Raffurty; and two sisters Ella Hon and Esta Karg.

To order memorial trees or send flowers to the family in memory of Ora Raffurty, please visit our flower store.