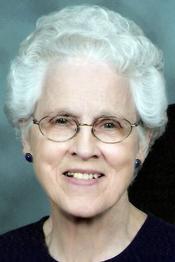 Please note all services were conducted by the Friemonth-Freese Funeral Home, Glasgow, Missouri.

Pat was born in the Aholt community of Chariton County Missouri on June 29th, 1930 to Fred and Cecilia (Tebbe) Monnig. Along with growing up in Glasgow she also spent part of her youth in Brunswick, Missouri and Anaheim, California. She graduated Glasgow High School in 1948. Pat married Henry Himmelberg on October 10, 1950 and they made their home on a farm just north of Glasgow where she and Henry raised their family.

Pat worked for Dr. Gardner for a period of time and spent most of her adult life as a loving homemaker and mother along with assisting her husband Henry in managing Henry's Clothing and Pat's Variety for many years. She was a very active member of St. Mary's Catholic Church, member of the Daughters of Isabella, Council of Catholic Women, Chamber of Commerce, & the Prison Ministry. Pat and Henry also helped with the settling of several Cambodian families with whom they stayed in contact with over the years. Pat loved to cook, quilt, travel and spend time with her family and friends playing cards and visiting. She was also fond of music and always eager to gather around the piano and sing.

She was preceded in death by her husband Henry; parents Fred and Cecilia Monnig; one sister Joanie Aholt; and one son-in-law Bill Woolverton.

Visitation and the Recitation of the Rosary was held Friday, September 6, 2013, at the Friemonth-Freese Funeral Home, Glasgow, Missouri, with the .

Mass of Christian Burial was held Saturday, September 7, 2013, at the St. Mary Catholic Church, Glasgow, Missouri. Interment was in the Washington Cemetery, Glasgow.

To order memorial trees or send flowers to the family in memory of Patricia Himmelberg, please visit our flower store.