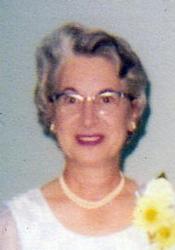 Pauline Andona Ashcroft, 92, of Pleasant Hill, was born Friday, April 9, 1920, in Hope, Kansas, the daughter of Martin Leander and Emma Louise (Hebe) Harrer. She departed this life Friday, February 22, 2013, at her home.

On December 7, 1946, she was united in marriage to Charles Albert Ashcroft, Sr. in Philadelphia, Pennsylvania. He preceded her in death of January 20, 1994.

Pauline was a homemaker. She was an avid gardener and loved growing vegetables and flowers. She also loved reading and playing cards. She was an active member of the Pleasant Hill First Presbyterian Church where she had served in numerous capacities including the Clothes Closet.

She was also preceded in death by three brothers, Cameron Harrer, George Harrer, and Willard Harrer; and one sister Dorothy Crawford.

She is survived by two sons Charles (and Terri) Ashcroft, Sr. of Haysville, Kansas, and Norman (and Laurel) Ashcroft of Blue Springs, Missouri; one sister Edith Harrer of Pleasant Hill; Six Grandchildren; Seven Great-Grandchildren; several nieces and nephews; other relatives; and many friends.

Cremation has been accorded. A memorial service will be held at 2:00 p.m. Tuesday, April 9, 2013, at the funeral home. Inurnment will follow in the Pleasant Hill Cemetery.

Visitation will be held one hour prior to the service at the funeral home.

To order memorial trees or send flowers to the family in memory of Pauline Ashcroft, please visit our flower store.