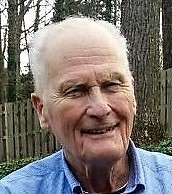 Ralph Edward Wouters, 91, of Pleasant Hill, Missouri, was born, Friday, February 14, 1930, in Mentor, Ohio, the son of Albertus and Annie (Lloyd) Wouters.  He departed this life, Wednesday, June 16, 2021, at the Hermitage Health Care Center surrounded by his family and friends.

Ralph attended Bowling Green University before enlisting in the U.S. Air Force where he served as an instructor during the Korean War for the Norden bombsight from 1950-1953 at Lowry Air Force Base in Denver, Colorado.  He worked as an accountant for Union Oil and Cryogenic Engineering in the Denver area until the early 1960s before moving to Lamoni, Iowa in 1965 to join Graceland University as its controller.  Ralph received his bachelor’s degree from Graceland University in 1970, and he continued to guide the financial, information technology and physical plant operations at Graceland until his retirement in 1990. In his retirement he enjoyed wood carving and traveling to see family and friends.

He was also preceded in death by his parents; one brother, Albert Wouters; and one sister, Edith Cline.

He is survived by his four sons Todd (and Susan) Wouters of Adel, Iowa, Dr. Reed (and Rhonda) Wouters of Preston, Missouri, Ross (and Maude) Wouters of Pleasant Hill, and Brent (and Shawn) Wouters of Atlanta, Georgia; ten grandchildren; ten great-grandchildren; one sister, Maureen Adrian of Anaheim, California; several nieces and nephews; other relatives and friends.

Cremation has been accorded.  Graveside military services and inurnment were held Saturday July 24, 2021, in the Pleasant Hill Cemetery with full military honors by the United States Air Force and the V.F.W. Post #3118 Honor Guard.

Memorial contributions are suggested to the Pleasant Hill Meals on Wheels and may be sent in care of the funeral home.

To order memorial trees or send flowers to the family in memory of Ralph Wouters, please visit our flower store.