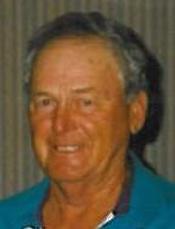 Ray grew up in Clinton, where he graduated high school. Following high school he joined the U.S. Army and proudly served two years in the Korean Conflict. After his time in the service he went to work for the Missouri Public Service in Pleasant Hill. While eating lunch one day at his favorite diner in Pleasant Hill he met the lifetime sweetheart Elma Jean "Snooks" Clements, they were married February 22, 1955.

He was an avid golfer and spent his many hours of his retirement on the golf course and traveling back and forth between his homes here in Pleasant Hill and Winterhaven, Florida. He was diagnosed with Alzheimer's seven years ago and due to declining health became home-bound the last two years.

Ray was a meticulous person who believed in following rules and etiquette in life and golf. He was a loving husband, father, grandfather, and great grandfather who instilled lifelong qualities in his children and grandchildren and loved his wife without end.

He was preceded in death by his parents and one brother James Lyle Rhoads.

To order memorial trees or send flowers to the family in memory of Ray Rhoads, please visit our flower store.