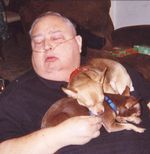 On August 13, 1983, Richard was united in marriage to Naomi Rue Covey in Grandview, Missouri.

Although legally blind, Richard was an Accountant for the General Service Administration in Kansas City for 35 years, retiring in 2005.

He was preceded in death by one brother Terry Downey and one sister Kerri Williams.

He is survived by his mother Peggy Brinkman of Lee's Summit; his wife Naomi of the home; one son Robert Downey of Pleasant Hill; other relatives and friends.

To order memorial trees or send flowers to the family in memory of Richard Downey, Jr, please visit our flower store.