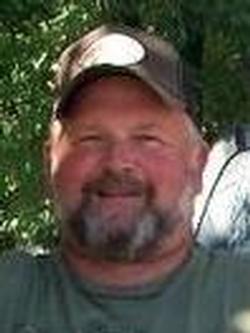 Rick was a 1978 Tri City Christian School, Independence, graduate and was attended the Bob Jones University. On September 14, 1991, he was united in marriage to Cheryl Ann Comer in Telluride, Colorado and to this marriage one daughter, Brooke Nicole Randolph was born. Rick and Cheryl later divorced.

Rick was employed as a truck driver. He had been a driver for K.C. Bobcat, Jack Cooper, Consolidated Freight, and most recently for Winco International Fireworks, Lone Jack. He had also worked for Sherwood Lawn and Landscape.

He was a 14 year member of the Strasburg Board of Education and also served on the Public Water Supply District #1 Board. He was a member of the New Life Church in Oak Grove, Missouri. In his spare time he loved singing, hunting, fishing, and a good game of pool; he particularly loved hunting in the Colorado mountains. Most important to Rick was spending time with his family; especially with his daughter, Brooke.

Rick was preceded in death by his father, Richard in 2009 and his grandparents, Murl and Dorothy Patterson, Lucille Randolph, and DeLoss Wilke.

Visitation was held Friday evening at the funeral home.

Memorial contributions are suggested to the Strasburg Cemetery or the New Life Assembly Food Pantry and may be sent in care of the funeral home.

To order memorial trees or send flowers to the family in memory of Rick Randolph, please visit our flower store.