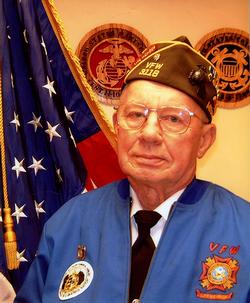 Robert "Andy "Andersen of Lone Jack, Missouri, was born August 23, 1931, in Kansas City, Kansas, the son of Marius Theodore and Ellen Krystine (Christensen) Andersen. He departed this life Thursday, August 7, 2014 at his home surrounded by love and family at the age of 82 years, 11 months and 15 days.

Andy was a 1947 graduate of East High School in Kansas City, Missouri.

He was a U.S. Marine Corps veteran of the Korean War serving honorably from 1947 until 1953. He received 2 Purple Hearts, Korean ribbon 4 star and the President Unit Citation star among many others.

On February 28, 1966, he was united in marriage to Dorothy Mae (Roberts) Duff in Miami, Oklahoma.

Andy was employed as a mechanic for Tobin Construction Company for 25 years and retired after 5 more years of work for Reitters Construction Company. He was an active member of the Veterans of Foreign Wars, Post #3118, Pleasant Hill, Missouri, for the past 15 years and served faithfully on the Honor Guard. He was also a member of the American Legion, Lee's Summit. He was a member of Beautiful Savior Lutheran Church, Lee's Summit, Missouri.

Besides his parents, Andy was preceded in death by one son, Robert Larry Andersen.

Funeral services were held Tuesday, August 12, 2014, at the funeral home. Pastor Jon Gruen officiated. The Final Salute Ceremony was conducted by the members of the VFW Post #3118. Graveside military services and interment followed in the Pleasant Hill Cemetery with full military honors by the U.S. Marine Corps and the V.F.W. Post #31118 Honor guard.

Memorial contributions are suggested to the Beautiful Savior Lutheran Church, Lee's Summit, and may be sent in care of the funeral home.

To order memorial trees or send flowers to the family in memory of Robert Andersen, please visit our flower store.