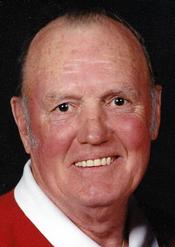 Robert "Mac" McLagan, 83, of Pleasant Hill, was born March 10, 1930, in Chicago, Illinois, the son of Edward Charles and Edna (Preisler) McLagan. He departed this life Thursday, January 16, 2014, at the Kansas University Medical Center.

On November 28, 1953, he was united in marriage to Mary Lou Beuerlein in Norfolk, Virginia. They enjoyed 60 years of marriage.

Mac was employed as a Log Buyer for the Penrod, Jurden & Clark Co., Norfolk, Virginia and Pleasant Hill Veneer Corp. Later he worked for A. D. Mohr, Pleasant Hill, Independent Order of Foresters and Calmar/Pfizer, Lee's Summit. He enjoyed his retirement years as a Marshall for the Country Creek Golf Course, Pleasant Hill.

As a young man Mac played and excelled in all sports, especially basketball and baseball. He was an avid golfer and loved a good game of poker. He was a member of St. Bridget Catholic Church and was a charter member and 4th degree of the Knights of Columbus Council # 13113 where he served as the treasurer for many years. He was also a member of the "Rusty Zipper" coffee Club, Pleasant Hill.

Nobody loved and enjoyed life more than Mac; he lived life to its fullest.

He is survived by his wife Mary Lou of the home; two sons, Greg (and Christie) McLagan of Littleton, Colorado, and Andy McLagan, of Pryor, Oklahoma; three daughters, Jeannie Foster of Kansas City, Missouri, Kathleen (and Ronnie) Pullin of Seguin, Texas, and Kari (and Dan) Warren of Leawood, Kansas; 13 grandchildren; 4 great grandchildren; other relatives; and a host of many friends.

The Recitation of the Rosary was held Monday, January 20, 2014, at the funeral home and followed by visitation.

Memorial contributions are suggested to the Knights of Columbus Council #13113 and may be sent on care of the funeral home.

To order memorial trees or send flowers to the family in memory of Robert McLagan, please visit our flower store.