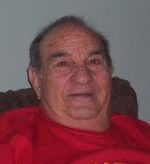 Robert Louis Miller, 78, of Pleasant Hill, Missouri, was born Wednesday, May 18, 1932 in Ferguson, Missouri, the son of James Joseph and Sarah Jane (Weinstein) Miller. He departed this life at 9:05 p.m. on Friday, June 4, 2010 at the KU Medical Center in Kansas City, Kansas.

On December 19, 1980, Robert was united in marriage to Joyce Carol Neal in Gravois Mills, Missouri.

Robert was a heavy equipment operator and was instrumental in the construction of several dams and highways in the area, including Lake Jacomo. He was a former member of the Elks Club in Laurie, Missouri. He was a proud member of the International Union of Operating Engineers Local #101.

Besides his parents, he was preceded in death by 2 sons Buddy Horton and Craig Horton; and 2 brothers Dick Miller & George Miller.

He is survived by wife Joyce of the home; three sons Brent (and Sherry) Miller of Grandview, Missouri, Nick (and Teresa) Miller of Washington Courthouse, Ohio, Brad (and Kelley) Lathrop of Warrenton, Missouri; four daughters Belinda (and Bob) Ragain of Sunrise Beach, Missouri, Chris (and Mike) Goff of Pleasant Hill; Sarah (and Marlene Beasley) Miller of Pleasant Hill, and Jackie Mann of Louisville, Kentucky; two brothers Jerry (and Verdelle) Miller and Jack (and Dixie) Miller both of Kansas, City, Missouri; 21 grandchildren; several great grandchildren; other relatives and many friends.

Memorial contributions may be made to the Strasburg Baptist Church-True Vine Ministries and may be sent in care of the funeral home.

To order memorial trees or send flowers to the family in memory of Robert Miller, please visit our flower store.