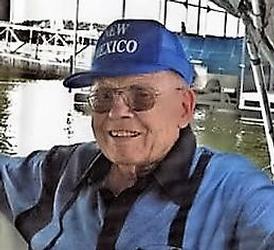 On April 16, 1950 Bob was united in marriage to Roena Mae Hammond in Kansas City, Missouri.

Bob attended high school in Rosedale, Kansas and graduated high school in Denver, Colorado. After graduation, Bob attended Central Technical Institute in Kansas City, Missouri prior to a career in engineering at Bendix Corp in Kansas City and then at Western Electric in Lee's Summit from which he retired in 1987. Bob was an active member of the The Summit Church, Lee's Summit.

Besides his parents, Bob was preceded in death by his wife, Roena on August 1, 2009; 2 sisters, Marge Green and June, Weaver; a half sister, Patricia Patton.

Bob is survived by his 3 children Rick White (Denise), Rhonda Aeby (Tom), Becky Ortbals (Ken) all of Lees Summit, Missouri; 4 grandchildren, Briana, Matt,Taylor and Hayley; a great-granddaughter, Brooklyn; other relatives and a host of friends.

A Celebration of Life service was held Saturday, July 16, 2016 at The Summit Church, Lee's Summit, Missouri.

The family suggest that memorial contributions may be made to the American Cancer Society and may be sent in care of Stanley-Dickey Funeral Home.

Arrangements are under the care of Stanley-Dickey Funeral Home, Pleasant Hill, Missouri.

To order memorial trees or send flowers to the family in memory of Robert White, please visit our flower store.