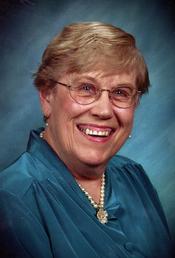 Roberta Leora Noland, 82, of Independence, formerly of Raytown, Kingsville and Raymore, was born Monday, January 5, 1931, in Turlock, California, the daughter of Harry August and Pearl Mae (Lee) Booth. She departed this life at 4:25 a.m. Sunday, July 7, 2013, at the Villages of Jackson Creek Memory Care Center, Independence.

On August 1, 1953, Roberta was united in marriage to Colin Junior Noland in Tabor. He preceded her in death on April 1, 2000. She furthered her education at the Kansas City College and Bible School for two years.

Early in her career she worked for the Nazarene Publishing House. Later she went to work for the U. S. Weather Bureau in the downtown office; from there she went to the Internal Revenue Service, retiring in 1978.

Roberta was an avid gardener and loved canning. She was absolutely the best cook. She also enjoyed knitting, photography, and painting. She loved to spend time with her grandchildren, play cards, and other games, entertain friends, and to travel. She had been a member of the Southwood Nazarene Church, Raytown; the New Covenant Fellowship, Garden City; the Worship Center, Harrisonville; and the Raymore Assembly of God.

She was preceded in death by one brother, Glen Booth; and two sisters, Wanda Ullom and LaVon Cauthon.

Memorial contributions are suggested to New Covenant Fellowship, Garden City, and may be sent in care of the funeral home.

To order memorial trees or send flowers to the family in memory of Roberta Noland, please visit our flower store.