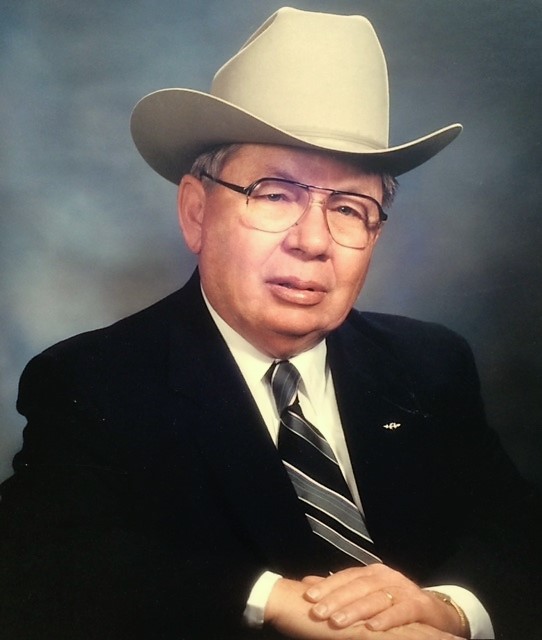 Robert Jesse “Bob” Clawson, 91, life-long resident of Strasburg, was born, September 2, 1925, the son of Parks Bland and Nettie Maude (Moore) Clawson.  He passed peacefully in his sleep on April 2, 2017, at the Missouri Veterans Home, Warrensburg.

Bob grew up in Strasburg alongside his younger brother William B Clawson.  He graduated from Strasburg High School and soon after, was on a boat to Europe where he served in World War II, European Theatre of Operations, in the U.S. Army; participating in the Battle of the Bulge. Shortly after his discharge he was employed at Lake City Army Ammunition plant where he worked until his retirement in 1983.

June 29, 1951, Bob was united in marriage to Gwylyn Virginia George; to this union two daughters, Cara Lynne and Cathleen, were born.

During the next several years, alongside his job at Lake City and his farming operation, Bob served as President of the Strasburg School Board,   Polk Township Assessor, President of the Cass County Library Board, clerked local auctions, and after his retirement, served as Cass County North Commissioner.  Bob was also a Master Mason of Jewel Lodge #480 A.F. & A.M., Life Member of the VFW Post #3118, member of the Ararat Shrine, the Pleasant Hill Lions Club, and a member of the Strasburg Union Church.

He is survived by his brother, William B. Clawson and wife  Barbara of Pleasant Hill; his daughter Cathleen Clawson Player of Pleasant Hill; 7 Grandchildren and 12 Great Grandchildren, Travis Day and wife Beth, their children Collin and Keenan; Jonathan Day and his daughters Emma and Molly;  Suzanne Day; Amanda McKinnon and husband Cameron and son Tyler; Robert Player and wife Tabitha and sons Bobby, Billy, and Johnny; Virginia Nudson and husband Chris and children Jordan and Broc;  and Emily Sloan and fiancé Keagan McNeall and sons Kayden and Jameson; other relatives and a host of many friends.

Funeral services were held Saturday, April 8, 2017, at the funeral home.  Pastor John Clark officiated. Past Commander Chris Hummel and the comrades of the Veterans of Foreign Wars Post #3118 performed the “Final Salute” immediately following the service.  Graveside military services and interment followed in the Strasburg Cemetery with full military honors by the U.S. Army and the V.F.W. Post #3118 Honor Guard.

Memorial contributions are suggested to the Strasburg Cemetery and may be sent in care of the funeral home.

To order memorial trees or send flowers to the family in memory of Robert J. "Bob" Clawson, please visit our flower store.