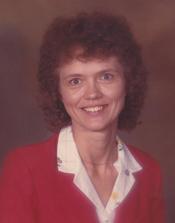 Sandra Jean Kilgore, 72 of Harrisonville, Missouri, was born Friday, May 10, 1940 in Creston, Iowa, the daughter of Russell Martin and Arlene Viola (Isenhour) Orr. She departed this life at 11:23 p.m. Thursday, September 20, 2012 at the John Knox Village Care Center.

She was a 1958 Creston High School Graduate.

Sandy had been a switch board operator for the Creston Mutual Telephone Company; later she was employed as a PBX Operator for the Lee's Summit Hospital. She was a member of the Faith Presbyterian Church in Kansas City.

She was an avid craftswoman and enjoyed crocheting and needle point. She and her husband Charles were exceptional gardeners and sold their produce at the Harrison County Arkansas farmers market.

Besides her parents, she was preceded in death by an infant brother and one grandson Christopher Vernon.

Sandy is survived by her husband Charles of Harrisonville; three sons Robert (and Kara) Shepard, Richard Shepard, and Charles (and Liana) Kilgore all of Pleasant Hill, Missouri; three daughters Vella J. (and Rodney) Christesen of Harrisonville, Missouri, Lori Thorpe of Warrensburg, Missouri, and Charlene Kilgore of Yellville, Arkansas; one brother James Orr of Orient, Iowa; 11 Grandchildren; 9 Great Grandchildren; her very close friend Beverly and Marvin Campbell of Kansas City; other relatives; and many, many friends.

Funeral services were held Wednesday, September 26, 2012, at the funeral home. Mr. Damon Sasyk officiated. Cremation has been accorded. Inurnment will be in the Graceland Cemetery, Creston, Iowa, at a later date.

Please click here to view the video tribute
To order memorial trees or send flowers to the family in memory of Sandra Kilgore, please visit our flower store.