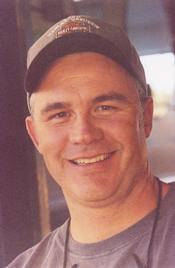 Steven Scott Putnam, 49, of Little Rock, Arkansas, was born Saturday, May 11, 1963, in Portsmouth, New Hampshire, the son of Clyde and Nancy Putnam. He passed away unexpectedly Tuesday, August 14, 2012 at his home in Little Rock.

Steven grew up in Jefferson City, Missouri, graduating from Jefferson City High School in 1981. In 1985 he received a Bachelor of Science Degree in History from Evangel College in Springfield, Missouri. His desire to help those less fortunate led him to the Peace Corps where he was sent to Thailand to teach English.

Steven loved to travel and visited several locations; Russia, Greece, Turkey, Israel, Egypt, Scotland and Mexico to name a few. He enjoyed kayaking, hiking and being outdoors. He found beauty in nature evidenced by the pictures of the many places he had traveled and the people he met. He demonstrated artistic skills at a young age and throughout his life he collected art and liked to be in the company of artists and creative individuals. Some of his employment experiences include; youth counselor, guest services coordinator, outdoor education leader, casino worker, paint technician, handyman, and office manager at Cardinal Health.

Steven is survived by his father and mother, Clyde and Nan Putnam of Pleasant Hill, Missouri; his sister, Heather Coleman, and husband Kevin; nephews Crosby and Conor; niece, Cassidy all of Kingsville, Missouri; and many cherished relatives in Scotland. Steven was blessed to have many special friends in his life including; Charlie Whiting, the George and Brenda Hemphill family, Julie Vandever, Ellie Syler, Melissa Christopher and the rest of his work family.

Although there are many words you could use to describe Steven; son, brother, uncle, friend, bon vivant, renaissance man, free spirit, perhaps the most important is that he was a gentle, sensitive and caring soul.

A gathering in his honor was held Saturday, September 8, 2012 at Sparky's CafAC. in Eureka Springs, Arkansas.

Please click here to view the video tribute
To order memorial trees or send flowers to the family in memory of Steven Putnam, please visit our flower store.