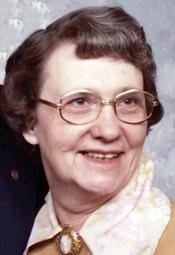 She was a 1940, Roscoe, Missouri, High School Graduate.

On November 21, 1939, she was united in marriage to Hubert Mitchell Wyatt in Osceola.

Thelma was a homemaker. She loved cooking, gardening and quilting; she especially loved fishing. While living in Bear Creek, Missouri, she was a member of the Bear Creek United Methodist Church. She was currently a member of the Coleman Baptist Church, Peculiar, Missouri.

Thelma was preceded in death by her brother, James Frasure; one sister, Mary Lou Wishard; and her uncle O.D. Cornelison.

She is survived by her husband Hubert of the home; one son, George David (and Joyce) Wyatt of Holden, Missouri; two daughters, Sharon Theriot of Greenwood, and Linda Harper, of Lee's Summit, Missouri; two grandchildren, Shannon Anderson of Lee's Summit, and Jessica (and Brian) Larson of Independence, Missouri; three great grandchildren, Kyle Larson, Brian Larson, Jr., and Sydnee Larson; two sisters, Naida (and Gene) Fenwick, and Wanda (and Jimmie) Frost both of Appleton City, Missouri; other relatives and friends.

Memorial contributions are suggested to the Coleman Baptist Church and may be sent in care of the funeral home.

To order memorial trees or send flowers to the family in memory of Thelma Wyatt, please visit our flower store.