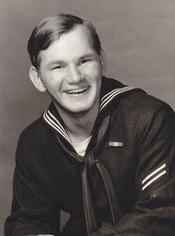 
Thomas Martin McMahon, 59, of Excelsior Springs, Missouri, was born one of seven children on Wednesday, October 3, 1951 in Rolla, Missouri, the son of Thaddeus A. and Beulah N. (McCrery) McMahon. He lost his fight with cancer at 4:43 a.m. on Wednesday, June 8, 2011 at the Rehabilitation Center of Raymore.

In 1958 his parents moved to Strasburg where Tom spent his childhood and early adult years. He was a 1970 graduate of Pleasant Hill High School. After graduating he joined the Navy. He was a deck hand on the USS Newport News for the next four years, and in 1974 was honorably discharged.

Tom was a very colorful person, one of his jobs was on an oil rig in Texas, he said it was the worst job he ever had; he later worked as a surveyor and traveled the country. In 1994 he moved back to Missouri and worked for the Grasspad in Olathe and Lee's Summit for over twelve years. This last year he worked for BOSCH in Excelsior Springs, he enjoyed this job and made many friends. He was a hard worker, but his greatest quality was giving. Tom would give to anyone who needed help even when he had little to give. Someone once said you can't out give a giver and that was Tom. He loved to garden and hand knotting rope.

If there was one person who brightened his life it was his daughter Jennifer.

He will be missed by all who knew him, he was a colorful person, and some color is now missing from our lives today, but God is adding Tom's color in heaven and heaven's a little brighter. We love you and miss you Tom!!

He was preceded in death by his parents and two brothers Micheal McMahon and Jeffrey McMahon.

He is survived by his daughter Jennifer of Lee's Summit; two brothers Stephen McMahon of Belton, and Phillip McMahon of Grandview; two sisters Marlene (and Bill) Eager of Lone Jack, and Victoria (and Fred) Lewis of St. Louis Park, Minnesota; several nieces and nephews; other relatives and many friends.

Visitation was held Sunday, June 12, 2011, at the funeral home, where full military honors were conducted by the VFW Post #3118 Honor Guard.

Cremation will be accorded following the visitation.

A memorial gathering and dinner will be held from 2:00 to 5:00 p.m. on June 25 with inurnment at a later date and inurnment will be in the Strasburg Cemetery.

Please click here to view the video tribute
To order memorial trees or send flowers to the family in memory of Thomas McMahon, please visit our flower store.