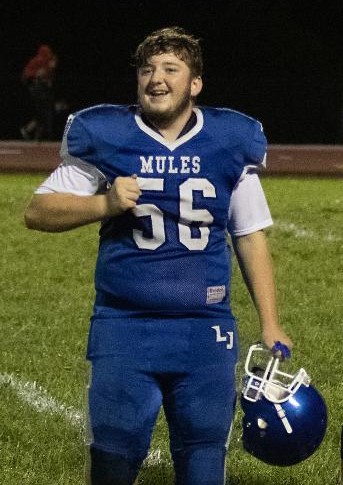 Thomas Russell Yates, 16, of Strasburg, Missouri, was born December 23, 2003, in Independence, Missouri, the son of Ernest R. and Kara L. (Hale) Yates.  He departed this life, Tuesday, February 25, 2020, alongside his sister as a result of injuries sustained in an automobile accident.

Tommy was a sophomore at the Lone Jack C-6 School District.  He was active in Mule football, wrestling, baseball, and was a percussionist in the band.  Tommy never met a stranger and was an all around good friend to all; especially if you were the underdog.  He was fun loving and had a hilarious sense of humor.  He had just recently started his first job with Stever Towing.

Funeral services were held Wednesday, March 4, 2020, at the Pleasant Hill United Methodist Church.  Burial was in the Lone Jack Cemetery.

Memorial contributions are suggested to the Strasburg School District and may be sent in care of the funeral home.

To order memorial trees or send flowers to the family in memory of Thomas Yates, please visit our flower store.