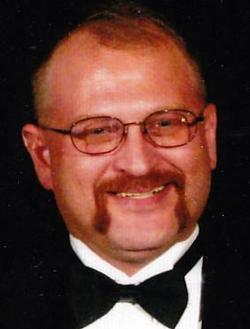 Troy attended the Pleasant Hill school system up through his junior year then moved to Camdenton where he graduated in 1988.

On August 20, 2000, he was united in marriage to Julia M. Radmacher on the Lake of the Ozarks.

He honorably served in the United States Navy as a Damage Controlman Second Class. He proudly served in both the Persian Gulf War and Desert Storm. Following his retirement from the Navy, he was employed as a police officer and fireman in Sunrise Beach and worked at their family restaurant in Sun Rise Beach. He attended St. Bridget Catholic Church, Pleasant Hill, and was a member of the St. Patrick Catholic Church, Laurie. He was also a member of the Veterans of Foreign Wars Post #3118 and the Knights of Columbus, Sons of Mercy Chapter #13113. He enjoyed tinkering, spending time on his Harley, fishing, and playing with his three dogs. He had a big heart and was always willing to lend a helping hand. He especially enjoyed working and distribution food with Fish & Loaves Food Pantry in Belton.

Cremation was ccorded following services inurnment will be in the Missouri State Veterans Cemetery at a later date.

Memorial contributions are suggested to the Homefront Hope Foundation and may be sent in care of the funeral home.

To order memorial trees or send flowers to the family in memory of Troy Brinkoetter, please visit our flower store.