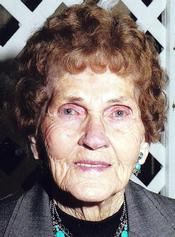 Verna Catherine Walker Noah, 102, of Pleasant Hill, was born Friday, June 24, 1910, a mile and a half west of Pleasant Hill, the daughter of William Jefferson and Anna Belle (Rollins) Cary. She departed this life at 2:10 p.m., Monday, May 27, 2013, at the Cass Regional Medical Center surrounded with love and family.

At a young age she and her family moved to Strasburg where they made their home; she graduated from Strasburg High in 1928. As a young lady she loved basketball, baseball, tennis, horses, and dancing.

On April 11, 1931, Verna was united in marriage to Virgil Walker in Pleasant Hill and to this union two children, Charles and Doreen, were born; he preceded her in death in October 5, 1975. On November 27, 1981, she was united in marriage to R.C. Noah in Cheyenne, Wyoming; he preceded her in death in on February 4, 1992. Verna had worked for Prewitt Manufacturing, Pratt & Whitney during WWII, the Pleasant Hill Garment Factory; later retiring as an electronics assembler from Bendix in 1975.

Verna had a strong work ethic to which she attributed her long life to. She also lived life to its fullest, enjoying each and every day. She was spunky and full of life always ready for the next adventure. She loved playing cards and spending time with her family.

She was a member of the Pleasant Hill First Christian Church for over 70 years where she had been active in several areas especially the CWF. She was a former member of the Rebekah's and the Bit & Spur Club.

Memorial contributions are suggested to the Pleasant Hill First Christian Church Building and may be sent in care of the funeral home.

To order memorial trees or send flowers to the family in memory of Verna Noah, please visit our flower store.