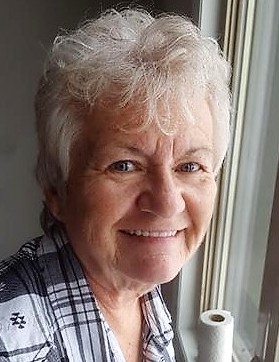 Vickie Lynn Stephens, 66, of Greenwood, Missouri, was born, January 29, 1953, in Warrensburg, Missouri, the daughter of David L. and Georgia C. (Smith) Scott.  She departed this life, Monday, May 27, 2019, at her home surrounded with love and family.

In July 1984, she was united in marriage to Harvey Stephens in Greenwood.

Vickie was employed as Tool and Die Maker for Honeywell.   She was a member of the International Association of Machinists & Aerospace Workers (IAMAW) where she taught health and safety.  Prior to her career with Honeywell she was a waitress at the Hollywood Cross Truckstop in Lee’s Summit.   She enjoyed mowing, gardening, quilting, and crafting.

Vickie was an active member of the Veterans of Foreign Wars Ladies Auxiliary.  She proudly served as the Maryland State President. While serving as president she was charged with the task of helping wheelchair bound veterans.  She raised $50,000.00 dollars helping veterans in Delaware, W. Virginia, and Maryland.  She was a member of the V.F.W. Post Auxiliary #2632, California, Maryland, and the Military Order of the Cooties Ladies Auxiliary Pup Tent 1, Lee’s Summit.

Vickie was preceded in death by her mother.

Memorial contributions are suggested to the V.F.W. National Home for Children, 3573 S. Waverly Rd., Eaton Rapids, Michigan 48827 or may be sent in care of the funeral home.

To order memorial trees or send flowers to the family in memory of Vickie Stephens, please visit our flower store.