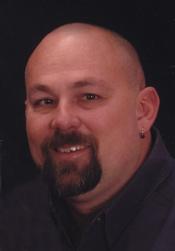 Lonnie Wayne Findley, 47, of Raymore, Missouri, was born Friday, September 6, 1963 in Kansas City, Missouri, the son of Lonnie and Margarette (Kincaid) Findley. He departed this life unexpectedly of natural causes on Sunday, March 27, 2011 at his home.

On March 12, 1983, Wayne was united in marriage to LaVonna Sue Ash in Pleasant Hill, Missouri.

Wayne was a gifted carpenter and was proficient in all aspects of construction. He was a former member of the Carpenters Union #1529.

His hobbies were many, but he had a passion for Harley-Davidson motorcycles and dirt bikes. He was a former member of the K.C. Hog Chapter, and a past Vice-President of the Point & Punch Riding Club. He rode with a "Brotherhood" of friends, Fraternitas Atis.

Wayne was a devoted husband and father, son and brother and grandfather; he loved his family with all of his heart and would give anything for them.

Wayne was one of those people everyone liked and immediately called a friend; he was someone you could count on, if you called him he would be there before you could hang up the phone.

Wayne always was there to give a helping hand no matter the situation. A great example of that is when an elderly lady called him to fix her garage door which he gladly did on his way home from work one evening, after he finished up with the door he asked her if she needed help with anything else.

There was a sparkle in Wayne's eye that no one could deny when he was around his grandkids. It took no time for them to be the highlight of his world. The minute Morgan was born she had him wrapped around her little finger.

Wayne was an avid hunter and fisherman. The hunting story that he was most proud of was last fall when he took Brent on a deer hunting trip and Brent shot his first big buck. One of his greatest joys was riding his Harley in the mountains of Colorado, as well as dirt bikes with family, and all of his riding buddies. One thing for sure Wayne loved his friends as much as he does his family.

Wayne had a great sense of humor like crumbling cookies in someone's boots, at one of our family dinners. Wayne was a lover of German chocolate pie, even when full he would say there is always room for pie.

He is survived by his wife LaVonna of the home; one son Tony Findley and his wife Holly of Raymore; one daughter Rachel Mitchell and her husband Brad of Holden, Missouri; three grandchildren Brent and Morgan Mitchell of Holden and Trent Mitchell of San Antonio, Texas; his parents Lonnie and Margarette of Centerview, Missouri; one brother Rod Findley and his wife Kim of Pleasant Hill; one sister Karen Drees and her husband Jeff of Centerview; paternal grandmother Naomi Findley of Lee's Summit, Missouri; other relatives and a host of many friends.

Visitation was held Wednesday evening, March 30, 2011 at the funeral home.

Memorial contributions are suggested to the St. Jude's Children's Research Hospital and may be sent in care of the funeral home.

Please click here to view the video tribute
To order memorial trees or send flowers to the family in memory of Wayne Findley, please visit our flower store.