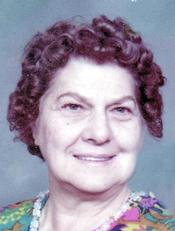 Willa Marie Hammons, 93, of Pleasant Hill, was born, Sunday, October 26, 1919, in Harrisonville, the daughter of William Roger and Ethel (Bittle) Hudspeth. She departed this life at 10:48 a.m. Thursday, May 30, 2013, at the Pleasant Hill Health & Rehabilitation Center.

Willa was a homemaker. She and Dan also owned and operated Hammon's grocery store and service station in Pleasant Hill for many years. She loved gardening, flowers and fishing. She was a member of the Pleasant Hill First Christian Church.

Willa was preceded in death by one brother William C. Hudspeth; and two sisters Cynthia A. Burt and Dora F. Ranallo.

Memorial contributions are suggested to Pleasant Hill Meals on Wheels and may be sent in care of the funeral home.

To order memorial trees or send flowers to the family in memory of Willa Hammons, please visit our flower store.